SixDegrees.com and Friendster are the "Grandaddies" of Social Network Sites.

When you think social network, the first thing that comes to mind are sites like Facebook, Twitter, and MySpace. What about Friendster, eCrush, and SixDegrees.com? Do you even know what any of these are? The history of social network sites essentially began with SixDegrees.com. 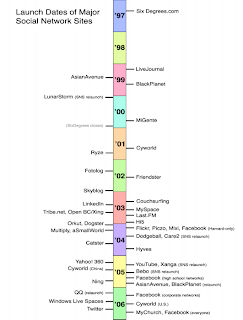 Six degrees of separation is the concept behind the social network service known as SixDegrees.com.
Created in 1997, SixDegrees.com was developed by CEO of MacroView the company, Andrew Weinreich. At the center of all social networks, MacroView created a web of contacts that allowed users to connect with friends, family, and acquaintances on the site. It allowed its users to create a profile, send messages, and post bulletin board items to their first, second, and third degrees. At the time, there were already dating sites and online communities, such as AIM, that included profiles and friend lists, but none of them allowed others to view friends.  After reaching a nearly 1,000,000-membership population, SixDegrees.com was bought out by YouthStream Media Networks for $125 million. Unfortunately, the social network pioneer failed to have a sustainable business due to its leader position in the social network industry. The lack of people online was not able to establish enough online friend networks. Today, YouthStream has “restarted” SixDegrees.com and only keeps it open to people who had previous membership or whom previous members invite. Another group of social network pioneers were sites AsianAvenue and BlackPlanet, which were created in 1999.

Freindster was considered one of the original and even the “granddaddy” of social network sites. 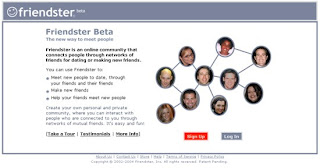 The name Friendster was derived from a mix of “friend” and Napster. Napster was a controversial site at the time, popular for it’s peer-to-peer file sharing. It was practically a household word due to the number of high-profile lawsuits filed against it. Friendster allowed its users to contact other users and share online content and media with those contacts. It was used for dating and discovering new events, bands, and hobbies. Within the first few months of the launch of Freindster, it had generated about three million users. It remained in the number one spot until the creation of MySpace in 2004. At the base of Friendster was the “circle of friends” technique for networking individuals in virtual communities, demonstrating the small world phenomenon. Similar to the “six degrees of separation,” the small world phenomenon was a group of experiments conducted to examine the average path length for social networks of people in the United States. The study was groundbreaking and concluded that the world is a small-world-type network characterized by short path-lengths.

2003 marked the explosion of the emergence of various competitive social network sites. Friendsters new competitors provided even more options for diverse communication and involvement features. Some of these competitors included Windows Live Spaces, Yahoo! 360, and Facebook.  In 2003, Google offered $30 million to buy out Friendster but the owners refused. Friendster was reported to have a value of $53 million. Despite it’s numerous strides to globalize and reach audiences in other countries in Asia, Friendster suffered significantly from the rise of Facebook. It was eventually bought out by MOL Global, one of Asia’s biggest Internet companies, and shifted to expansion in Asia. It discontinued all its user social network accounts and became a social gaming site.

The main challenges of survival for social network sites, such as SixDegrees.com and eCrush, were creating high customer value in an extremely competitive market and generating enough revenue to maintain a business.
New social Network sites are constantly popping up. In order to stay relevant and popular among online users, sites must create user satisfaction among its target group by constantly evolving and keeping up with new technology. Although Friendster wasn’t able to generate as much popularity as sites like Facebook and Twitter, it pioneered many of the different methods to generate revenue by advertising. Some the advertising strategies it adopted were pop up ads, contextual ads from Google, sponsored links in the web search, and an upgrade in Friendster blog (a product selling service of Friendster). Some of these strategies are still used, today, by the top social network sites, as well as the use of newer revenue generation methods. Premium membership is an example.
Although sites like SixDegrees.com and Friendster aren’t as relevant in the US as they use to be, they paved the way for a new and more advanced group of social network sites. It’s hard to say whether these sites could gain Facebook popularity because of how far they’ve declined in the past years. Maybe not in the United States, but Friendster has popularized itself greatly in Asia with 8.2 million users. I personally believe that it would be extremely difficult, if not impossible, to reach popularity levels of sites like Twitter and Facebook because of the amount of time Friendster and SixDegrees.com have been off the market or not in the public eye. It would take something extremely innovative or some type of new technology to create a wave of followers to switch from Twitter and Facebook to Friendster or SixDegrees.com
Posted by alexisen1 at 5:59 PM